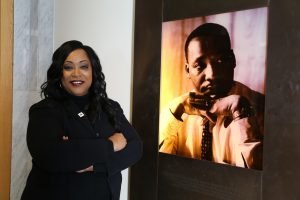 Vazaskia Crockrell is the Director of Equity and Social Justice for the King County Council, a new role that will act as a liaison between the council and marginalized or underrepresented communities in King County. She’ll spend time interacting with community groups and individuals, reporting back to council about issues of racial disparity, access, injustice and more. Similarly, she’ll help inform those same communities about work the council is doing to make government more inclusive, accessible and equitable.

Crockrell comes to the county after three years as Director of the Office of Juvenile Justice for Washington state, where she gave voice to youth in the justice system and led changes to reduce racial disparities and give the most impacted youth and their communities a voice in the justice system. She helped give incarcerated youth a seat at the table and led them through improvements that included eliminating the use of detention for status case offenses and raising the age of juvenile jurisdiction to 25 for certain offenses. Simultaneously with that role, she also served as Chief of Equity, Diversity, and Inclusion for the state Department of Social and Health Services.

Born and raised in Tacoma, Washington, Crockrell has believed since a young age in the vital importance of promoting equity for historically marginalized groups and has dedicated her career to that work. She believes the most important goal is to elevate the voices of the most impacted communities and give them a seat at the table in their own governance. She has instilled that ethic into her three successful daughters, who incorporate it into their professions in communications, education, and law.

Crockrell holds a bachelor’s degree in Ethnic, Gender and Labor Studies from the University of Washington. She recently was awarded the Social Justice Warrior and Courageous Champion for Youth award from the Washington State Partnership Council on Juvenile Justice. When she’s not hard at work, she enjoys skydiving, parasailing, rock climbing, zip-lining, and plans to, one day, swim with great white sharks.