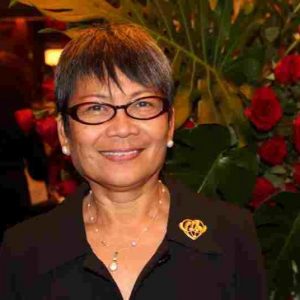 The Honorable Velma Veloria, was born in Bani, Pangasinan, Philippines and immigrated to the United States in 1961. She received her BS in Medical Technology from San Francisco State College. She was elected into office and became the first Asian American woman and first Filipina American elected to the Washington State legislature. Representing the 11th District, Veloria served from 1992 until 2004. She organized and led international trade missions and provided contacts for small businesses to the international marketplace.

When 3 Filipina Americans were murdered inside the King County Courthouse, Veloria worked with Emma Catague, Norma Timbang and Dr. Sutapa Basu of the UW Women’s Center to gain passage HB 1175, making the State of Washington the first state in the nation to criminalize human trafficking on a state level. Since the enactment of HB1175, 48 states in the nation have passed similar legislation. Additionally, concerned that Washington State was silent on international trade policies that impacted Washingtonians and the Philippines, she authored legislation that created a Joint Legislative Oversight Committee on Trade Policy.

As a former labor organizer, Veloria has a demonstrated track record of successfully lobbying for and educating the broader community on important working family issues. Veloria is passionate about sharing knowledge and working directly with people to empower themselves and has proved to be skilled as a leader in motivating and mentoring a multicultural workforce to realize their potentials.

As well as working for the EEC, Velma is also community organizer for multiple non-profit agencies, ( Faith Action Network and the Coalition of Immigrants, Refugees and Communities of Color (CIRCC)). Veloria continues to serve as co-chair of the UW Women’s Center Anti Human Trafficking Task Force.